I didn't really consider changing my tablet anytime soon, as I was quite happy with Archos 80 G9 which I've got around October. But there was that ridiculous Christmas clearance of the HTC Flyer tablet at DSG stores (PCWorld, Dixons and Currys) here in the UK recently and you know... it just happened by itself. ;) When the clearance was pretty much over everywhere, I've somehow managed to bag (in fact, my wife did) a WiFi-only unit, the very last one from the display in Dixons nearby. Phew!

So what makes the HTC Flyer so special? Firstly, the price. Reduced from >£300 to a mere £185 is an unbeatable bargain. Secondly, the specs. It sports 1.5 GHz CPU, 1GB RAM and 16GB of storage. Pretty nice upgrade from 1GHz, 512MB and 8GB that my Archos had. Thirdly, the form factor. I regarded 8-incher from Archos as a perfect spot for tablet, so I thought 7-incher from HTC can't be far off. 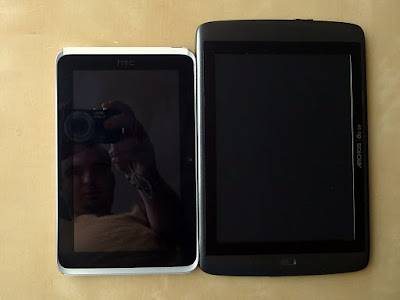 First impression once I've got the Flyer in hand - boy, it's small! Much smaller than anticipated. Perhaps one inch difference isn't that much but I reckon that is the screen aspect ratio that actually makes that difference. Flyer features 16:9 widescreen, while Archos has more classic 4:3 format (1024x600 vs. 1024x768 resolution-wise). I personally think 4:3 is better and more natural format for tablets hence the reason the Flyer felt small and awkward at first. On the other hand, display quality in Flyer is superior to Archos - it is basically much brighter and colours are move vivid. 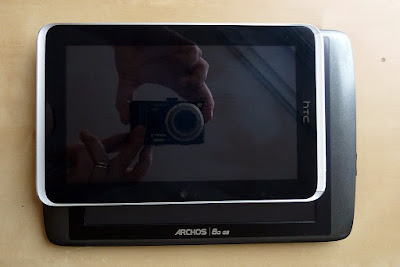 Flyer definitely makes small'ish looks up by the build quality. It feels much more solid and robust than somewhat cheap and plasticky Archos, although the Flyer is a bit thicker.

Rather unpleasant surprise was proprietary connector instead of a standard micro-USB slot for charging and data transfer. Considering that virtually every other HTC phone and device released in recent years is using micro-USB connector, the reason why they decided to use something completely different and annoy users in the Flyer is beyond me. I now need to carry around an extra cable - just in case if I needed to charge it up or transfer files quickly outside home. Bugger!

Actually, thanks to attentive reader over at Coolsmartphone, I've "discovered" that proprietary USB connector isn't proprietary after all. It does take standard micro-USB cables too. I've assumed it is proprietary just by its looks without properly checking other cables. Lame me!

On the other hand, that overall UI fluidness doesn't quite translate to multimedia capabilities of the Flyer. It doesn't play AVI or MKV videos out of the box, while 3rd party video players supporting such formats struggle with fluid HD/FullHD playback too. This is an area where Archos particularly excels at, presumably thanks to its hardware decoders support, as it managed to play 1080p videos without a glitch when I was testing it. I also found DLNA client much better and easier to use in Archos than in the Flyer. However, I'm not bothered by these shortcomings that much, as I'm not really doing any serious multimedia stuff on a tablet anyway.

Software-wise, the Flyer came with Gingerbread originally, which I've quickly upgraded to Honeycomb. HTC Sense bundled on top of it is something I personally dislike but in some way I learned to live with it. Nonetheless, I liked vanilla Honeycomb experience on Archos much much more.

In terms of Ice Cream Sandwich upgrade availability, HTC is obviously taking a piss of its users and doesn't bother to announce any upgrade plans for the Flyer so far. I'm guessing they'll never do that anyway and the only hope to bring ICS joy to Flyer at some point would lie in hands of xda-developers magicians. Archos, on the other hand, has announced ICS upgrade schedule for 1Q12 back in December already. Shame on you, HTC!

Overall, I'm fairly happy with the switch to the Flyer. The main thing I'm most pleased about is massive gain in performance in day-to-day usage. I've got to like widescreen form-factor eventually too - it is definitely much easier to hold in one hand in portrait mode which is a nice bonus while using tablet for reading. Major pain points are mostly software-related - the HTC Sense crapware and uncertainty regarding ICS upgrade, which I'm hoping to work around with custom ROMs at some point. I'd never buy the Flyer for the full, non-discounted price, however considering I've paid even less than I've originally paid for Archos (£185 vs. £199+delivery) I can't really ask for more.