For the past year or so my over-5-year-old Dell Latitude D620 laptop has been working 24/7 as a home media centre PC. Hooked up to the LCD TV with VGA lead for video and standard 3.5mm jacks for audio, combined with wireless keyboard+trackball combo it was mostly used to watch TV/VoD streaming over the internet (thankfully Xilo has truly unlimited broadband). However, I've been thinking to upgrade this rather archaic setup and replace the dated laptop with dedicated HTPC machine. I wasn't in the hurry tough, so over the course of few months I've ran through few options which included Zotac Z-BOX, Xtreamer Ultra and Acer Revo RL3700 among others. But one day I came across a very good deal on Acer Revo RL100 which I've never heard about earlier, nonetheless given its specification and bargain price I have decided to get one straight away. 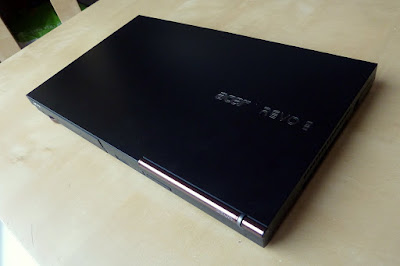 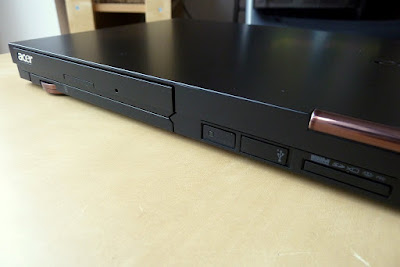 First impression of the device is definitely its compact size and attractive design. It is much much smaller and lighter than anticipated, beats not exactly the biggest 14-inch Dell laptop hands down. It also doesn't look and feel like a PC or even media PC at all, but like a well-designed piece of home Hi-Fi system instead. It also comes bundled with a special stand which allows putting device upright in vertical position.

Connectivity-wise Revo leaves a bit to be desired. It sports only three USB 2.0 ports overall - two in the back and just a single one in the front. There's a memory card reader in the front panel too. In terms of audio-video connectivity, there's an HDMI output (cable is included in the box!), standard 3.5mm headphones/microphone combo and an optical output. And that's pretty much it. Not breathtaking amount of options, especially in the USB department, yet I don't keep zillions of accessories around so it's just fine for me.

Regarding that I am a Linux boy and every computer under my roof has some sort of Linux installed by default (including wife's laptop!), I have made a very odd decision of NOT making Acer Revo just another in-house Linux machine and keep Windows 7 just as it came pre-installed on the hard drive instead. I really wanted to avoid the hassle of reinstalling everything from scratch and just start using the kit asap. It quickly became apparent that for all purposes this machine serve us and after applying few tweaks, Windows 7 is just fine. Turns out that I'm either getting old and lazy or I'm just not that Linux badass as someone could think I was.

In terms of actual performance, I am actually not that very heavy multimedia user to push such device to its edge straight away. I didn't even play a single blu-ray disc (not to mention a 3D one) on it yet, as a) I don't have one; b) I don't see the point of testing 1080p full-HD content when my rather dated TV just manages 720p. I did however watch a film in 720p mkv file with no hitch, so that's fine by me. I also tried a DVD disc with some film, once inserted into the drive Acer's dedicated media software called "clear.fi" has launched and executed DVD playback straight away. No fuss whatsoever, love it.

Hard for me to judge on general Windows 7 performance in day-to-day tasks as I don't have direct comparison but it scores 3.6 in Windows Performance Index if that's worth anything. In my eyes overall performance is OK, however I did put effort into uninstalling some bloatware that came pre-installed first. 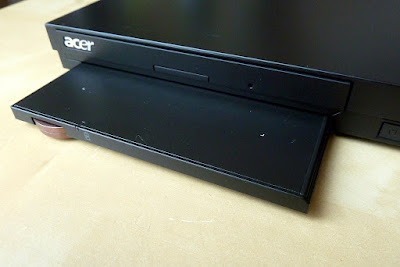 Revo comes with a fancy wireless remote control which works in two alternative modes: as a touchpad and illuminated touch-sensitive qwerty keypad. It nicely slides and hides into the outer casing of the device and doesn't take any additional space. In terms of actual usability, it is OK for basic interactions with the PC but nothing compared to the regular wireless keyboard when it comes to typing something more than an URL into browser of search query in youtube. Since I've already had compact wireless USB keyboard, I don't use Acer's touchpad that much anyway.

One final thing definitely worth mentioning about Acer Revo RL100 is its quietness. It is literally inaudible at any point of use - whether while watching a 720p mkv file or just being completely idle during the night in quiet room. Interestingly, it doesn't get too hot either or at least I didn't ever notice it. Top stuff!

Overall I am absolutely happy with Acer Revo RL100. Its compact, stylish, quiet and fulfills all the requirements I have against the media PC. Additionally, it cuts out the need for separate DVD/blu-ray player in the future. Perhaps the specification isn't breathtaking by today's standards but I don't mind that at all. Again, for the bargain price I've paid and considering it I couldn't really ask for more.