Nokia Lumia 920 and the tale of déjà vu

Exactly a year ago, thanks to the lovely team at Nokia Connects I've had an opportunity to trial the Nokia Lumia 800 - the first Nokia-designed smartphone running the Windows Phone operating system. Putting all ramblings whether Nokia's sudden strategy switch was right or not, the Lumia 800 impressed me, however not to the point where I'd be ready to ditch Android in favour of WP7 just yet.

Fast-forward 12 months and I find myself with the latest top dog from Nokia's Windows Phone range in my hands, the Lumia 920. Again, kudos to Nokia Connects for letting me have it. 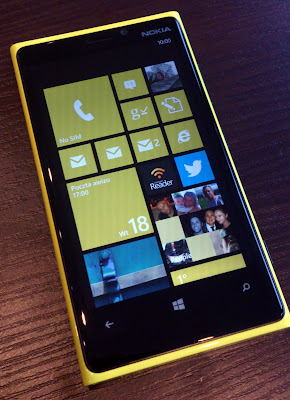 Let's get to the point. Hardware-wise Lumia 920 is simply FANTASTIC. The build quality is top-notch and the case feels exceptional whilst holding in hand. Same goes with the display, which is simply smooth as silk and absolute pleasure to operate. Plus, it responds to touches even through the winter gloves. That's a huge bonus in countries where winter does actually mean having loads of snow and temperatures below -10C as standard.

To be fair, Lumia's quite bulky and heavy, yet within acceptable standards. And the overall build quality impression does quickly make you forgive the actual size and weight of the device.

I've had pretty high expectations against the camera in the Lumia 920 and having tested it I can only confirm that expectations weren't just met - they were exceeded by several light years! I won't be elaborating too much over the topic and put it simply: Nokia Lumia 920 has the best camera in the smartphone world and most likely better than the average dedicated compact camera. Period.

I wasn't able to test the wireless charging facility in the Lumia, however I recognise huge potential around that front and looking forward to see how it evolves over the next few years.

Let me take it from a slightly different angle.

A year ago, while reviewing Lumia 800 I was impressed with WP7 as a genuinely fresh and innovative mobile operating system bearing huge potential, however still having too many shortcomings or just little annoyances that overall made me consider it as "not there yet" for me to even think about switching from Android ecosystem.

A year later and déjà vu happens. Windows Phone 8 is "not there yet" either.

See, generally speaking, the Windows Phone 8 is smooth as silk and it does introduce few nifty improvements like more flexible tiles in the home screen. And the selection of apps in the Marketplace has improved dramatically. I was able to find alternatives for most of the core apps I currently use in my default Android phone, which I reckon is pretty impressive. And... What else, hmmm, there must be something else added new in the WP8, right?

Surely there are other more or less important improvements here and there, yet still they are buried under the number of annoyances that just weren't properly addressed since WP7 release.

A notable example is the lack of unified notification system, something I was already moaning about a year ago. See, I love Twitter and Facebook integration within the People app, yet I'd love to see instant notification as soon as I get a comment on my status update or someone mentions my name somewhere. Sure, I know the concept of live tiles is pretty cool and eye-pleasing but it doesn't really cut it. Managing sound volume is still a bit of pain, too. I mean, do I really need whole 30 grades of ringtone volume? Plus, the ability to mute device completely has strangely disappeared altogether, leaving vibration as the most "silent" sound mode.

Sadly, dialing a number quickly isn't as quick as it could be either. There's no smart dial facility in the standard phone pad (but There's An App For That, called RapDialer available free from Marketplace) and contacts aren't immediately searchable within the phone app.

Speaking of search. The hardware search button is most useless piece of any Windows Phone altogether, still not being able to work in contextually correct manner, still bringing up Bing each time pressed instead. Crap.

The onscreen keyboard, admittably still one of the best to date is somewhat ruined by the way the spelling correction works. Or I just couldn't find the pattern when it works and when it doesn't. Or perhaps I am just too spoiled by the SwiftKey 3 in Android already.

Anyway, all these little pesky things here and there are really making a huge dent in my overall impression of the WP8, which is in fact quite likeable otherwise. I love the user interface consistency and smoothness across the whole environment, and most of the apps are quite frankly beautifully designed. I am pretty sure there will be lots of people who wouldn't even notice any of these little annoyances and genuinely love WP8.

Quite important aspect of this story is that a year ago I was using a smartphone running Android Gingerbread as my primary mobile device. The WP7 in Lumia 800 was a breeze of freshness entering the smartphone world and as a Gingerbread user I genuinely considered the next major Windows Phone release as potentially something to describe as "This Is My Next".

The year passed and Android made a huge leap forward with major releases of Ice Cream Sandwich and Jelly Bean. Today, I've happily settled down with ICS-powered smartphone and the Nexus 7 as its companion running the latest and greatest JB 4.2.

At the same time Windows Phone 8 introduced flexible live tiles on the home screen and few other nice things.

Do you see the point?

I reckon Windows Phone 8 will be pretty successful anyway, especially enclosed within such a beauty like the Lumia 920. It's really not that bad as it seems from my standpoint. It's just still not there yet. Not for me.