Thanks to the great people at WOMWorld/Nokia (as usual lately ;), I have been lucky enough to get my hands on the latest and greatest Nokia offerings in Symbian world - the new Nokia X7 and E6 which were officially unveiled to the world yesterday morning.

Demonstration was carried out in WOMWorld's headquarters in London by Nokia product managers. They brought few prototype devices to show off and give us to play with. So what are the first impressions?

This phone looks pretty good outside, it has quite extravagant shape, nice and good looking body and big display. It feels very solid and is fairly thin however due to rounded shape of the back it tends to slip away from hand. Taking pictures is particularly awkward with this phone. 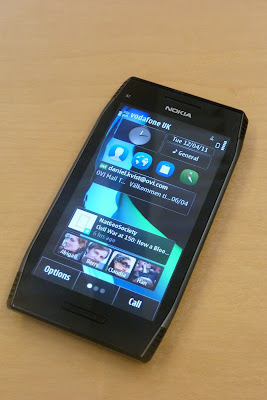 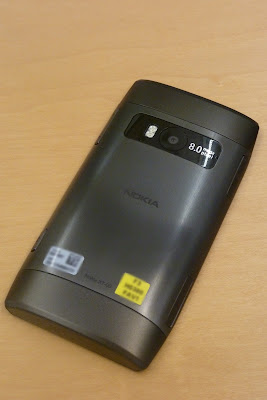 Then the screen. Large, bright and colorful AMOLED 4-incher is pretty much wasted with quite awful 360x640 resolution. Why oh why are they doing that?! Also yesterday HTC has released their top-of-the-line Sensation model with absolutely amazing 540x960 resolution squeezed into 4.3-inch SLCD display. No further comment is necessary here, I guess.

Camera was a bit of surprise when no autofocus kicked in upon pressing shutter button. But that's EDoF-camera-type thing I guess, as I never had a chance to give it a shot before. Sample shots taken with the unit down below - quite OK but not groundbreaking either. I don't think multimedia phone as X7 tries to be will do with camera lacking autofocus but maybe I'm wrong.

Well. I don't have much else to say about X7 hardware-wise. I'm taking that X7 is meant to be entertainment device with strong focus on gaming and multimedia but I'm not sure how this goal can be successfully achieved. It has multimedia'ish and aggressive looks, that's for sure, but screen resolution is lacking a lot, camera doesn't provide
autofocus facility and also device internals (CPU/GPU etc.) are very very far from being impressive nowadays either. Having much stronger in almost every aspect Android-based competition just around the corner, frankly I can't see Nokia X7 to be successful, unfortunately. Nokia N8 unveiled about a year ago was quite impressive back then (and that impression got wasted with exceptionaly long time before it actually hit the shelves) but trying to show off a cut-down version of the very same N8 a year later is not a great idea, I reckon.

Being a long-standing user and fan of Nokia E71/E72 and generally that kind of device form factor, I was particularly interested to see E6. In contrary to Nokia X7 I was very very far from being disappointed and in fact I must say Nokia E6 is pretty awesome! Happy times! :)

First and foremost - the display. Less than 2.5-inch screen sporting 640x480 resolution means only one thing - it's super-duper-crisp! I don't have to say much more besides that it matches famous iPhone's retina display when it comes to pixel-per-inch density. Boy, putting iPhone 4 aside I haven't seen any display offering such crispiness and "wow" factor for a long long time!

Keypad is a little bit different too. While keys are about the same size they feel a bit "bumpier" and softer than in E72. I'm not sure whether that's a good or bad thing after such short play but I guess it's just a matter of getting used to.

Another important thing to note about E6 and its display is of course its touch'iness. E6 seems to follow Nokia's recent quite popular trend of producing "touch'n'type" devices and as the matter of fact it does a very good job! Full qwerty keypad below the display along with capacitive touchscreen is perfect combination. Of course, there is a classic d-pad (which is not touch sensitive like in E72) for navigating through UI so there is still a choice for those who prefer old-fashioned way of interacting with device, plus it's definitely more convenient while editing text.

E6's camera is 8-megapixel EDoF unit, probably the same as in X7 and other recent Nokia smartphones, so autofocus enthusiasts won't enjoy it, yet with business-oriented device like E6 this is something I could live with, while in X7 such camera is an obvious mistake. Nonetheless, I have recorded a sample 720p video with E6 with it and I must say it's quite good!

Overall speaking about hardware-wise aspect of Nokia E6 I must say it has exceeded my expectations by miles. Compact, good looking, solid, gorgeous and touchable display, and good quality keypad - this is Nokia E6, a definite way to go for E71/E72 owners looking to upgrade their handsets. In contrary to X7 I have a feeling E6 will become quite a good seller and will make significant contribution to the target of shipping "further 150 million" Symbian devices during Nokia's transition period.

Along with new handsets, Nokia has unveiled a major upgrade to their Symbian OS quite originally called "Anna" (btw, there are reasons to believe that the next major Symbian update will have female name beginning with 'B') . Both X7 and E6 come with that OS release by default so naturally I had chance to get a glance at it. To be fair, I've been playing with prototypes so perhaps some things will look different in final shipping devices. Nonetheless, I didn't go through every aspect of new Symbian either, so it's quite likely I missed something here and there.

First of all, don't get false expectations about this update. Despite fancy name and somewhat promising 'PR2.0' badge it does not carry groundbreaking changes. It has some rough edges polished out and few new things added but frankly these really should be there in the day when Symbian^3 was born and released to the public. Better late than never, one could say tough...

New icons. They look nicer and more consistent to me but it's a matter of taste. I also don't quite get why Nokia is making such a big deal out of just making icons look different.

Portrait qwerty touchpad. I generally don't like the idea of typing text on screen so I'm not the best one to judge usability of this new feature. It's just OK to me.

Ovi Maps. This app has the potential of replacing Google Maps in the phone which is my primary tool for getting around the town. One of the newest features is ability to download full country maps to memory card for offline use directly within an app. I didn't explore that in-depth but I really like the idea. Well done.

Finally, the browser. It has undergone considerable overhaul, that's for sure, yet it still has room for improvement. First thing to notice is unified location bar at the top of the window instead of that weird separate go-to/search bars in previous version of the browser. Rendering speed was difficult to judge as internet connection was a bit flaky, yet I got the impression that navigating through heavy-content websites was a bit troublesome and performance was lacking. However it could be the matter of tweaking settings and telling browser to not load flash-based content by default. It also still is unable to reflow text accordingly to the zoom level, like in Android browser, which is a bit disappointing. Yet I liked the fact youtube videos were playing back in fullscreen mode without a glitch. Generally speaking, browser improvements are steps in right direction but there's work still to be done in this department.

Disappointing X7, quite stunning E6 and not-too-convincing Symbian Anna. Perhaps the most inconvincing thing about new Symbian edition was lack of reassuring from Nokia representatives about future Symbian release cycles. "We don't know", "not sure" - were answers to that question. Well, either they know that and have outlined plans for new releases sometime soon but can't say, or they are just quietly waiting until Windows Phone comes in and finally dance on Symbian's grave.

But anyway, being absolutely impressed by Nokia E6 I'm very keen to get one for a review from good people at @WOMWorldNokia as soon as it becomes available. I am spoiled by Android by now but I also have lot of sentiment to the excellent E71 and E6 has definitely sparked that sentiment in me again. Would it be able to steal and take my gadget heart over from Android? Stay tuned to find out.

Couple of sample camera shots plus an HD video recorded with Nokia E6 below, check out my Flickr photostream for more: