So I'm lucky! Once again I have been given a brand new mobile phone free! This time thanks to Social Media Week event sponsored by Nokia and related Twitter promo action by folks at @WOMWorldNokia, shiny silver Nokia N8 has landed in my hands. :) Many thanks!

In fact I am double lucky, as I was quite fancy to get N8 in my hands pretty much since it has been released. Not necessarily to have it (as it doesn't have hardware qwerty keyboard, for starters) but to get to know it and see how the latest incarnation of Symbian OS works out. Both N8 and S^3 have been receiving mixed press since the release and I feel it was mostly negative. That alone made me more eager to see it myself. Plus, I am looking very forward to see how N8's famous camera performs. 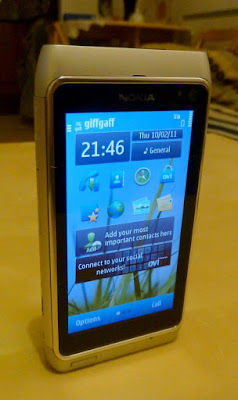 As I've had quite hectic afternoon and evening today, I didn't have much chance to play with N8 just yet, so my first impressions are quite sparse. But here's what I've got so far.


Well, that's pretty much all I can say about N8 so far. I'm going to use it myself for the next few days and gather more thoughts on the device and Symbian^3 overall, so stay tuned for more.
Posted by Dawid Lorenz at 00:18
Labels: n8, nokia, review, symbian